My goal recently has been to do one fun and educational thing with each of the boys every day. Whether that is coloring, cutting paper, play dough, treasure baskets, a fun craft etc. I want to have one specific thing each day to teach each of the boys something. Most days we do quite a few more than just one, but I set a goal of one since it is completely attainable on all days.

Enter the Googely-Eyed Monsters! When trying to think of something different, fun, and educational for Jack to do one day, I found a bag of eyes that some one had given us. Jack was immediately curious about them, and wanted to shake the bag to see the eyes move. While he was investigating them, I grabbed a stack of neon colored foam sheets, elmer's glue, markers, and some safety scissors. And thus our Googely-Eyed Monsters were born! 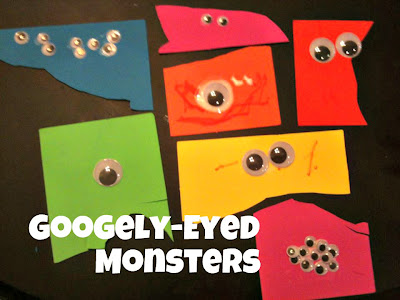 (all of these are Jack's one of a kind creations!)

I started out by modeling the steps to make a monster for Jack. I cut out a random shape from the foam sheet, placed two dabs of glue on it, set the eyes on the glue, and then drew on a nose and smiley mouth. After reminding Jack how to properly use scissors and how to use glue, I put my example away for a while so that he could be completely creative!

He loooooved this project! One of his favorite to date! I already knew he loved to cut paper, so that of course was a huge hit. But, he really loved using the glue... 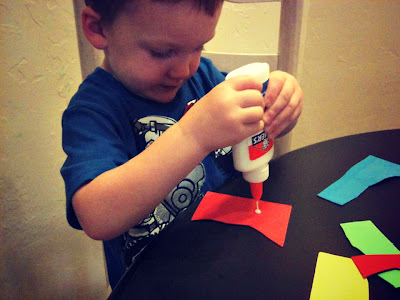 I thought he would go crazy with the glue and use too much....but he did fantastic. I was so impressed. He concentrated very hard and only put on small dabs of glue.

Then, he would take the eyes one at a time and place them on the glue. 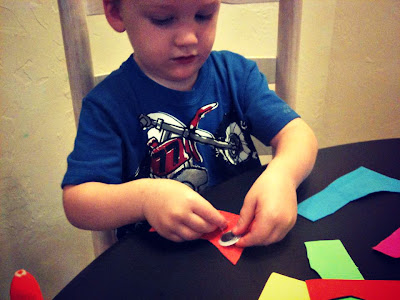 (some of momma's boring monsters and some of Jack's fabulous monsters) 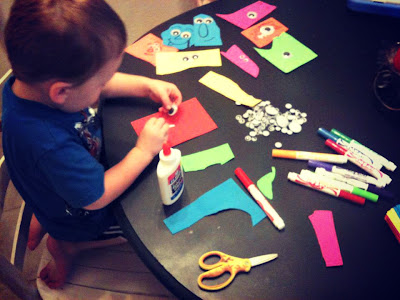 He finished up by drawing noses and mouths on them. 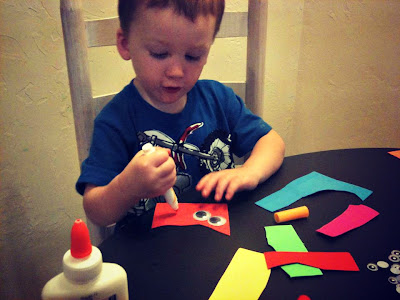 I loved see his interpretation of what a nose and mouth looks like. 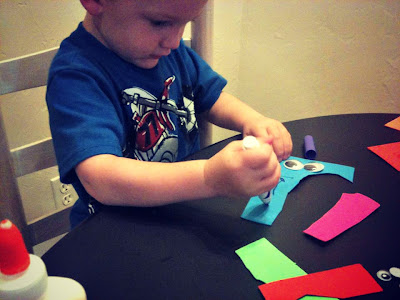 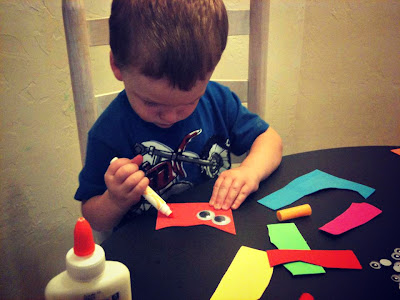 He stayed focused on this for over an hour! Yes you read that right...and HOUR! He was really bummed when he ran out of eyes. I think if he would have had more he would have definitely kept going. Momma is going to have to buy more! 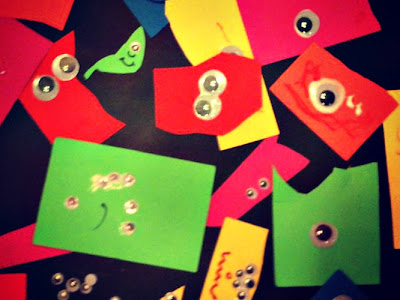 (some of momma's and Jack's monsters)

This project is fantastic because it develops a few different things in your child....

Fine Motor Skills. Your child is practicing cutting, controlling the amount of glue that comes out and where it comes out, placing a small object (eye) on a small target (glue dot) and using a marker to draw.

Concentration. Using scissors, glue, placing eye balls. All of this requires a lot of  concentration and hand-eye coordination!

Creativity. This was my favorite aspect of this project. It was amazing to see all of the different shapes Jack came up with. I love that he experimented with where to place the eyes, and even how many eyes to place. I gave him complete creative control. I did not correct or suggest anything. (The only thing I did correct was how he held his scissors, marker, etc.)

another great bonus to this project...you can find everything you need at the Dollar Tree!

Linking to Fun Stuff Fridays, For the Kids Friday, and TGIF

Posted by Lorissa Kearbey at 7:40 AM 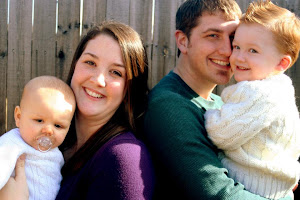 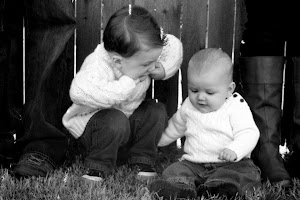 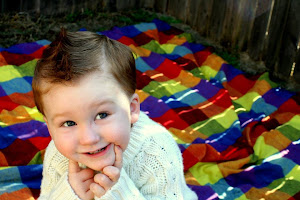 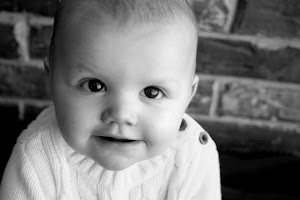 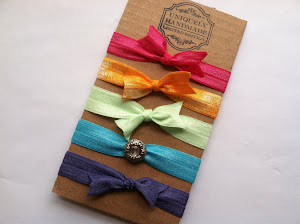